SAFE STABILITY CONDITION TO BE PROVIDED DURING DOCKING

SAFE STABILITY CONDITION TO BE PROVIDED DURING DOCKING

The above sketch shows a ship docking and at the moment when the stern has touched the stern block. The ship has taken a slight starboard list, maybe due to a light squall.
At this condition the mass equation is given byDisplacement = R + residual buoyancy
∆ = R + (∆- R)
Where (∆ –R) is the residual buoyancy.
Referring to the transverse view on the left side and taking moments about k (keel) and using the transverse centreline as the moment arm we have,
∆ * GK = (∆- R)*KM
The above equation is called the critical condition equation when R occurs and the position of M (metacentre) in the floating condition, can go below on the transverse centreline, or climb up on the centre line , depending on location of residual buoyancy.
The condition for safe docking ie the ship does not slip off the blocks, is that the critical metacentric height at this instant is still positive (GM is still positive).

On  further  simplification  of  this  equation  we  have

In addition to the trim limitation the shipyard sets the blocks with a declivity to suit the trim and this ensures that all the blocks come into contact at the same time avoiding any condition for a stern reaction to be formed. With the declivity in place , a slightly higher trim will result in a small stern reaction and can be neglected. In graving docks declivity is arranged (Refer to Fig4) .In floating dry docks declivity is accomplished by trimming the dry dock suitably and then correcting it to even keel after the ship has completely seated on all the blocks. .
The danger of excessive trim results in a dent occurring in the area adjacent the stern frame bottom and coffin plate. As the water is being pumped out of the dry dock the stern reaction increases at the same rate in fall of draft and it could be high with depth of water in the dock falling fast especially towards the completion of pumping out water. The high rate of increase in the reaction force is like an impact and hence this can be called a silent impact.
In the case of floating docks , the effect of high stern trim will result in the stern blocks being pushed behind, and that is because of trim of the dock itself.
The author had witnessed such a situation at Chennai in Chokani ship yard when they were in operation . A ship owned by Essar shipping was being docked at no2 floating dock. During docking operations it is customary for the Yard Diver to carry out an underwater check at the time of docking to ensure that the ship is proceeding correctly to seat itself on the blocks. When he went down he observed that as the ship was attempting to make contact aft a few blocks on the aft side were pushed out from their positions leaving the ship without supports on the aft side. The docking was therefore abandoned, and the ship instructed to move out and come back after correcting the trim.
The requirements for safe stability during docking and undocking may therefore be given by six golden rules as follows
(1)The mean draft selected should be such that the critical GM on docking is positive ( The Master should verify with the help of the loadictor that the mean draft recommended by the yard is safe and results in a positive critical GM.)
(2) The ship should always be upright during docking and undocking. This requires monitoring of the clinometers during the docking operation and take suitable corrective action by transferring water or bunkers from port to starboard or starboard to port as required. No water should be pumped in or out of the ship as that would affect the selected displacement of the ship.
(3) Do not exceed the recommended mean draft of the ship
(4) Do not exceed the recommended stern trim.
(5) Ensure all bilges and bilge tanks are dry and there is no unaccounted water on board .
(6) Soundings of all tanks containing F.W , Ballast, F.O., D.O., and L.O. must be recorded and must be the same for each tank at the time of undocking
If F.W. is consumed during the stay in dry dock, the consumed amount must be replenished into the tank before undocking. A very common occurence is that the forepeak tank is normally drained out for purposes of survey. Hence before undocking, the bottom plugs are re fitted and the forepeak tank filled up to the original sounding prior to undocking..
The blocks are made of steel I section with one wooden standard thickness block strapped to it Additional wooden blocks can be fixed on it to suit the given height required using steel spikes to fix them so that they do not float when water is filled into the dry dock. This system provides for easy removal and refitting of blocks as required after the ship has docked. (Refer to Fig below). 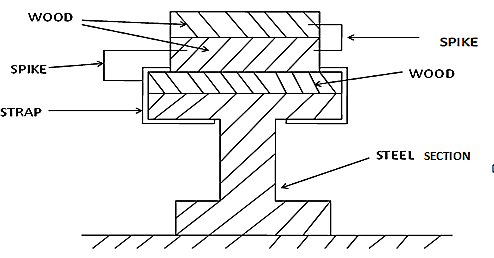